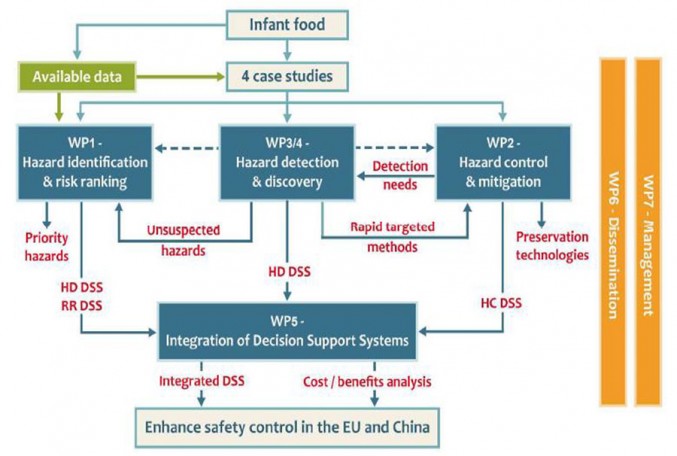 WPI will develop DSS prototypes to carry out hazard identification (HI DSS) and risk ranking (RR DSS) within the infant food chain. In order to identify the top priority hazards to be managed (either chemical or microbiological hazards), also including unsuspected ones discovered in WP3 and WP4 (Step I), first a hazard identification with a very broad scope is needed. This requires the creation of underlying databases by collecting, aggregating, validating and analyzing a wide range of available. data. In a second step, the evaluation and ranking of the risks of the hazards as identified in Step I will enable to filter the main ones according to their public health impact but also to their perception by society. For both steps, integrative procedures and databases will be translated into a prototype DSS that will be tested on the four case studies (CS i-CS iv) and upgraded by refining databases and procedures based on a systematic benchmarking with the related outcomes of the SAFFI Chinese mirror project.

WP2 will develop a prototype of a decision support system for hazard control (HC DSS) and set preservation technologies/ mitigation strategies for enhancing the food safety management throughout the four infant food chains chosen as case studies from raw materials to consumer. This will be done by i) quantifying the fate of key chemicals and the behavior of microbiological hazards along the four infant food chains chosen as case studies, ii) setting and assessing the. ability of emerging processing and preservation technologies (HPP, PCD, RD) to control pathogens at least as efficiently as classical technologies while mitigating key heat-sensitive contaminants, iii) setting efficient monitoring and sampling strategies at operational (IFC) and governmental (FSA) level to enhance. the effectiveness of food safety management options. The HC DSS prototype will be upgraded based on the relevant additional data, technologies and management solutions provided by the SAFFI Chinese mirror project.

WP3 will focus on the development of novel methods based on analytical chemistry and bioassays for the detection, monitoring and discovery of chemical hazards. It will include i) high-throughput and cost effective targeted detection of the key contaminants in the four case studies for improving surveillance by FSA while promoting self-monitoring by IFC and ii) non targeted approaches for the discovery of unsuspected and unknown contaminants combining high throughput quantitative bioassays of infant food toxicity, directed HRMS profiling and bio-and chemo-informatics. WP3 outcomes (databases, procedures, tools) will be translated into a DSS module dedicated to Hazard Detection (HD) which will be upgraded based on concatenation, benchmarking and harmonization of the databases, tools and procedures with the SAFFl Chinese mirror project.

WP4 will focus on the implementation of novel omics method for microbiological hazard detection including the application of i) WGS as biotyping method to improve targeted microbial hazard detection, ii) metataxonomic, metagenomics and metabolomics for determining microbial dynamics and associations of the food microbiota with particular emphasis on tracing the microbial contamination source, iii) transcriptomics and volatolomics to identify biomarkers that describe and may predict microbial hazard behavior. Data and procedures of WP4 will also integrated into a DSS module dedicated to hazard detection and upgraded with the complementary data and tools provided by the SAFFI Chinese mirror project.

WP5 will integrate the DSS prototypes (H1,RR and HC DSS) designed in WP1 and 2 and the DSS module dedicated to hazard detection designed in WP3 and 4 (HD DSS) into a beta version of a generic DSS for safety control throughout the infant food chain. This beta version will be tested by European and Chinese end-users in order to make it suitable for further commercialization in both markets. WP5 will also propose plausible scenarios of infant food hazard control systems, predict their cost / benefit ratio for the stakeholders in the EU and China and provide them with guidelines integrating food safety, regulatory and socio-economic inputs.

WP6 will ensure a proper communication on the project and the dissemination of its results to various key players and stakeholders involved at various levels in monitoring and supervising the infant food chain safety processes and the health of children, namely food authorities, food companies, healthcare professional, academics, other companies, consumers. This WP6 will also contribute to set EU-China common schemes for regulatory standards and harmonize control practices.

WP7 will coordinate the SAFFI project in an effective and efficient manner thanks to the project coordinator, together with the experience of the coordination assistance team and the WP leaders, highly experienced in the management of H2020 projects. This WP will a also i) perform clustering with other projects financed under topics SFS-37-2019 and SF-45-2016, and ii) deal with the knowledge and research data management.

WP8 will ensure and demonstrate that the research carried out in the SAFFI project respects good practices and recommendations regarding ethical issues raised by the project activities.